I'm going to put this here in the Road to Optima, but also cross post it to the project page.

Saturday afternoon, I took the car out - so far, I've been driving like a saint but things happened (things), and I really got on it 4th gear 5600 rpm. On a public highway.... moving on.

I think that before I go racing (not Optima), that I need to spend a lot of time making this thing go through the air better. It feels solid but... I think I'm going to have to do some pretty substantial air management...

I put some high temp stuff from Jegs in the Camaro. Seemed like a good idea.

Juist a quick thought. That seems lile good speed, and I bet there is more available. First chance you get be sure and "scale" the car. Front/Rear and L/R. There are a lot of setup guides for c5/6m not so much C3 old skool Greenwood, and there is a Corvette Handling that has some AX info in the Downloads section too. All that nice upgrade to strengthen the suspension needs to be put to good use.

phantomjock said:
Juist a quick thought. That seems lile good speed, and I bet there is more available. First chance you get be sure and "scale" the car. Front/Rear and L/R. There are a lot of setup guides for c5/6m not so much C3 old skool Greenwood, and there is a Corvette Handling that has some AX info in the Downloads section too. All that nice upgrade to strengthen the suspension needs to be put to good use.

and now I just realize I may have a problem (a good one, but still)... I have to weigh in at more then 3200 lbs... the real number is 220lbs plus the first number (3176).... I think before I get too concerned, I'll reweigh. I changed the ride height - so there could differences (and I need to change it again with perhaps a different rear spring because my assumptions when I ordered those springs was wrong... typing out loud, I need to verify rates, maybe put the fronts on the rear)....
Last edited: Mar 23, 2021

lots of 'news' I've signed up on SCCA and signed up for my first autocross with them in Portland, Oregon on April 16. I had to 'class' my car, and I classed at Xtreme Street, XA... that is, barely disguised race car that looks like a street car (in short, I suspect USCA is cutting into their turf). XA class (more then 2750 lbs, rwd)

I see they classed me as CAMS... hmmm.... I'll have to fix that.
The ride back was quite a ride. 65 mph headwinds (sustained), then torrential rain, then class 3 hurricane winds, then heavy, heavy snow - but the moment I went across the pass, it was still wet (though 10 minutes later, I bet it wasn't).....

I met a lot of really neat people. Funny thing, since I drive a Corvette, everyone told me about all the Corvette people and who I should know and talk to (who had Corvettes)...

I got to ride along in two, different cars - which was beyond cool. They have a great novice enabler (not sure that was her actual title), who went out of her way to explain all the overlooked things about how to do this successfully.

In other news, my tire went flat - but the good news is I have a 12v air compressor - so it was easy to fix.

I had a brake line leak a bit - tightened it up before my last run and it didn't seem to leak again.

There is that puff of smoke on right handers... that I need to fix

Dried the car off this morning.... it got soaked - thankfully nothing that won't easily dry - but before I drive in another rainstorm, I'm taping the gap at the sunroof - I don't blame astrotop... the windshield, at one point, had a good 1" of ice on it and then snow on top of it.

I don't know if I'll get another round in Spokane - Portland is the week before, but if I can. I will... neat people, neat place, nice 4x4 track...

The challenge that is only me, or just never talked about.
Shipping.

I know that likelihood of something arriving is inversely related to the likelihood it will show up on time. UPS, my rock-solid delivery company.edited 3 days later.edited Then another seller used FedUp (with predictable results).editededited

Add to this, the UPS shipment had the wrong parts.edited Took 4 phone calls to get the right parts on their way and they might make it in time for this weekend.edited I'd love for my new differential to show but I know the part hadn't even been pulled - so rather then frustrate myself, I'll call them next week if it hasn't shown.editededited

​​​​​​​
*oh, and I'm racing very locally this weekend (by racing, I mean Ax). Did spend money at my local sponsor of the Autocross... was very pleasantly surprised to find his prices were very much in line with what I could buy online. You can be sure I'll shop there more often.

humph.edited I went to PIR, they have noise limits.... 97 db noise limits. if you've been following along, you'll know that my noise at full song is 111 db.edited I didn't find out before I went but I'm so glad I did because I spent time with my parents - something that's been hard to do since I saw them a year ago....edited

but I have a problem to fix.edited Thinking a corkscrew with some steel wool as the first shot.edited I'm also not against injecting water to muffle the sound... I really need to be below 105 - from there it's arguable....edited

One guy here welded a couple of 3” ID glass packs together to quiet down his 502 if I remember correctly. So, two per side and it sounded pretty good. The police told me the spiral turbo mufflers were too loud so I added vortex cones ( perforated plate cones). I always thought a short section of glass pack would help a lot, but never bothered as there were no other complaints.

Another thing, you might look at how they make those tuned resonator mufflers, and adapt that to side pipes.

I think these are $$$, but if you have perforated plate they are two opposing cones.

Thinking of my post on your other thread -- made me wonder if there might be any advantages of "extra" flow from a 2x2 exhaust with the cut outs... Another item to put in my "to do some research" file.

Where I'm going - you mentioned you are seeing a "cap" on your HP at higher RPM: Is it air in - or Is it air out? Hmmm... I'll need to do some looking.

I do like the blown aero options that that dual system could open up too. [But you knew that.] 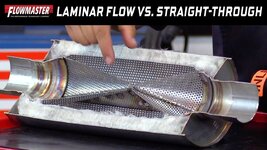 We had a big “discussion” on another forum over perf plate cones. People didn’t believe me when I bolted in the off-the-shelf vortex cones.

There is actually a lot of literature on the acoustic impedance of perf plate.

rtj said:
We had a big “discussion” on another forum over perf plate cones. People didn’t believe me when I bolted in the off-the-shelf vortex cones.

There is actually a lot of literature on the acoustic impedance of perf plate.

Last time I priced it, it wasn’t cheap.
Click to expand...

I'd love off-the-shelf but 4x$80 for $20 worth of stainless is a bit much for me... I'm headed to my favorite metal supplier in a bit to buy perf stainless...

Seriously considering using the Suburban as the tow vehicle.... I think it'd be a lot more comfortable there (even though it gets worse mileage and a touch less powah)

In other news, the painting crew will be here on the week I'm gone, gutters will go on the house, and the rails for the deck will be at the powder coater

Why do you care? well, I got the hall pass predicated on getting the house painted while I was gone.... checked that box too... I know, I know, no one else has to complete their honey-do list to go racing.... it's okay, I can handle it

SuperBuickGuy said:
I'd love off-the-shelf but 4x$80 for $20 worth of stainless is a bit much for me... I'm headed to my favorite metal supplier in a bit to buy perf stainless...
Click to expand...

Hope they get you what you need for noise levels.

Talk to me about track pooches.

Buick is coming with me - he's okay in warm weather and I have a special tarp that guarantees he'll be the coolest thing there...

but what do I need to know?

Willow Springs weather.... is it true that it doesn't get above 70 degrees in May/June?

I got my sparco onsie. now a neck brace and I'm safe!


*and yes, I get being safe and all of that - but still, I look ridiculous in it so there will be no pictures :bestwishes:
You must log in or register to reply here.