On the CF this fellow was ripped off for a restoration job- but he does not realize it & the restorer has buffaloed him.

He sent out a 63 buzzer tach & it came back without the buzzer provision on the tach gauge itself. The repair shop told him they “decay”, they “disintegrate”.

I tell you what I learned after 50 years as owner of a 1963 FI Corvette with a buzzer tach & with an additional 41+ years in the sales of these type parts. On my web store I have had & sold 3 of them in the past 10 years.

Below is a jpeg of the rear of a 1963 only buzzer tach – with the rubber boot surrounding the rod like terminal at 12 o’clock. They do not “decay or “disintegrate unless the whole cluster has been under water and nobody would be "restoring" that tach.

Someone please contact one of the following fellows in this thread & encourage them to advise Ptjsk pursuing this thief or have him email me. I do not have any of their emails. 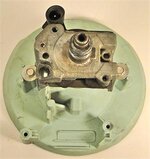 Thanks to whomever alerted Pat (aka Ptjsk). Pat & I spoke on the phone; I assured him he should not accept the “decay” or “disintegrate” fable. He stated there are sending him the parts to convert the tach they returned to him - back to a buzzer tach. If the needle must be removed again, the tach must be recalibrated.

Dick Miller (RIP) founder of CMD (Custom Mold Dynamics – later renamed Trim Parts) told me the 63-64 speedo or tach needles were very complex & difficult to manufacture & they had a 50 per cent reject rate. Those needles are a real PIA - not flat like 53-62 or 65-82 gauge needles.

But those 63-64 gauges are colorful with the deep concave brushed Aluminum cone in the center. I honestly cannot remember if my 63 tach buzzer is hooked up as I don’t approach redline & can’t squirm under the dash. Fourty + years ago one of they first reproduction parts to come out of the DocRebuild “factory” was the 63 only Tach Buzzer “harness” (complex - 2 wires – Red & Blue) with 3 connectors. Never was a big seller. ☺ Then along came Tim Partridge founder of Lectric Ltd and I had competition. They do a nice job. Never had a return or failure & never had any complaints about dash bulb sockets. 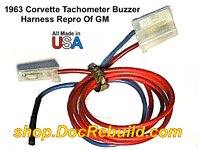