rtj Thanks, that video is a good summary of radiator inlet strategy. It is easier to watch a video explanation, than read tons of documents. Here is a jump back to a distalation on 2 images that are germane: https://www.vettemod.com/threads/internal-body-aerodynamics.11568/post-131229

I have made a few mods to Walter Korpf's Figure 124 to show what is my approach. [Now, that the cat is out of the bag!] I've not included a splitter or air dam, but these belong as well. And - YES, I got to get going!!!

A few notes: the Kiwis are referring to the 1/3 opening - a good compromise. But closer to 1/6 is more optimum - if you don't have cooling challenges. Sealing around the radiator is important as they state, but I plan on supporting additional cooling with fans. This worked well on my SR. Adding "mechanical support" could be construed as an "unfair advantage" as some potentially additional downforce could be derived from this configuration, but I was never in a position to be challenged.

Regarding airflow separation in the duct. Duct design errors could be overcome with the fans. And, testing the entire upper lip could be tested in several configurations before setting one in fiberglass/CF. Basic design can build on diffuser knowledge, as there has been much testing on these in recent years. I like the hood fins SuperBuickGuy has incorporated on his build. These could be modified to help tailor airflow on exit (physically bent) or mechanically airspeed actuated, or via flow differential. [Any ARDUINO builders present?]

I hope the Kiwis are still at it. Unfortunately, the political situation "Downunder" has become a mess. I may not be returning anytime soon.

With my radiator in a slant-forward position, the compromise to the duct length will be the average distance from inlet to radiator, or an "overbite configuration" - more to follow.

Interesting aero on the NASCAR Cup cars. Notice the splitter tunnels and the airflow out of the rear of the wheel wells. Belly pan under the motor. NACA duct, probably for cooling behind the motor. Rear diffuser. 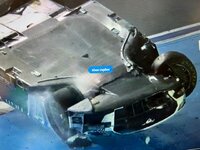 A lot of interesting details there.
1. Guess it had some help getting inverted for our viewing...
2. Looks like damage to the center of the engine bay cover (looks bent) any thoughts?
3. Are the wheel flow fences asymmetric? Makes some sense in a roundy-round car or are we seeing damage there too?
4. Nice having the jack points built in the belly pan. I've made a note...
5. Drivers side tunnel looks like it feeds into a duct. Can you confirm - thoughts?
6. Interesting "air dam" in front of the drivers-side tire.
7. Reckon that is a side exhaust exit just aft of the wheel?

Some good information in that picture. I'd take some time to source the image, but it is nice outside and I've got some body work to get to.

This was from a crash at the Coca Cola 600 last weekend - multiple roll-over so there is damage to the underside already. I think everything was pretty symmetrical before the crash. I was curious about the rear diffuser. I think at the leading edge, just forward of the rear tires, there is a "blow-out" panel that dumps the airflow from the diffuser when the car is traveling backwards - prevents lift like the roof flaps and keeps the car from going airborne backwards. If you google the crash there is video that may give you a better look.

Thanks for the lead.
I did a bit of sleuthing and then an analysis of the accident frame by frame to get some good pics. Not the same car perhaps, but useful viewing of the belly pan.

I'll answer my own questions and add some pics and observations:

1. Guess it had some help getting inverted for our viewing... Hey it is NASCAR - Racing is Rubbing and sometimes a wheel folds up in the infield and oopsie - inverted!

2. Looks like damage to the center of the engine bay cover (looks bent) any thoughts? In the previous pic maybe so, but in the following still flat. Also note the diffuser segments are just inboard of the wheel/tire with the wheels straight. More on this later. 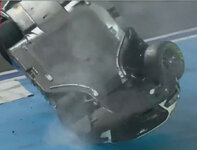 3. Are the wheel flow fences asymmetric? Makes some sense in a roundy-round car or are we seeing damage there too? No, they must have been damaged in the previous photo. Here they are clearly symmetrical. Also note the "skid" pucks fore and aft to minimize rubbing/wear on the fence. [Also note the pucks are venting smoke/heat from the engine bay. What goes out, most likely goes in. Are these the inlet cooling for the engine bay? 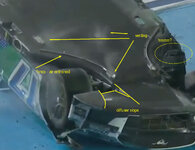 4. Nice having the jack points built in the belly pan. I've made a note... Yeah, I need those too.

5. Drivers side tunnel looks like it feeds into a duct. Can you confirm - thoughts? In the pics I pulled these appear to be closed. But Ducts could be useful in creating a double diffuser further aft.

6. Interesting "air dam" in front of the drivers-side tire. Shape is confirmed in these pics too. It also helps shape the diffuser into the wheel well space. So here is an idea; if the diffuser inboard of the wheel could create a high pressure area, just right for wheel brakes and bearings, and excess vented through louvers topside? Maybe, the increased in crosssectinal area as the diffuser slopes upward would cause the pressure rise and lower speed - hopefully to match the flow outside the wheel - or slightly higher pressure to push through the brakestack, rotor, and wheel.

7. Reckon that is a side exhaust exit just aft of the wheel? Could be. Earlier prototypes had the exhaust mid door, but drivers complained about cockpit heat, so maybe moved forward.

An interesting area seen on the passenger side wheel well. Intended opening to vent the wheel well - or damage? Can't tell.

Belly pan appears to have an upward slope (marked in yellow) then curves (recurves) to the section just behind the 2 "skid pucks." Or, is the shape just an illusion created by shadow in the video. Can't say.

One thing NASCAR has been working hard on; keeping the "Show" going. That means traffic, drafting, and "rubbing." So as a result, many aero enhancements are purposely limited. I.e., the splitter sizes are limited by rules, and underbody aero is being manipulated to ensure cars can draft and pass, something you could eliminate with some aerodynamic schemes. Similar situation in F1. Keep the cars tight for the show.

Last comment: From the departure of controlled racing (upright), until "proof of life," was a scant 31 seconds. Those are lonely moments sitting in the car waiting for the crash crew - even more so inverted. Glad everyone is good. 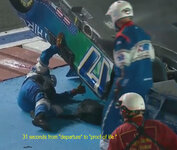 He makes this look easy.

That was really informative and kinda entertaining. The on track "oops" at the end was a nice touch.

The McMurtry Spéirling has dethroned the Volkswagen ID R as the fastest car to complete Goodwood hillclimb
evo.co.uk

“Other challenges of the system still to be resolved include creating an effective filter system so that following cars aren’t peppered with debris that’s sucked up and ejected, but there’s then the issue of what to do with debris that is filtered out. You don’t want to be carrying it around and emptying bags when you pop the car on charge like it’s an expensive vacuum cleaner.”

Found a real nice playlist of Aero Analysis on the Bugatti Boldie. Nice what you can do when starting with a blank sheet of paper - but there are a few items that can be incorporated into a resto/mod of a C3 too. This is something that rtj would normally bring in - but I couldn't resist. [I don't think this is a double posting - I could be wrong].]


There are some interesting F1 clips that cover belly pan aero worthy of mention too.