This is for sale mid $50k, low mileage, huge depreciation.

In other cars as it really isn’t recognizable.

“2008 callaway corvette! $167,100 build price plus the cost of the corvette! Velocity yellow with full ebony deutschleder german interior. #9 out 15 made! Clean carfax! This callaway vette makes 580 horsepower from its eaton supercharged 6.3l ls3 v8 which is 150hp over a stock corvette. Callaway put in larger fuel injectors, and a auxiliary fuel pump controller. The suspension is upgraded with callaway anti-roll bars which are fitted in the front and rear to help with cornering. This corvette does 0 to 60 in 3.5 seconds and with a reported top speed of 200 mph.“ 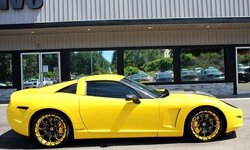 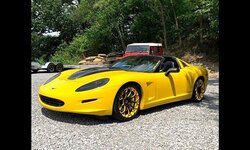 Also a bunch of cars from mongoose Motorsports collection.

Thats quite a financial beat down! Whats a low mile 2008 going for these days?

BBShark said:
Thats quite a financial beat down! Whats a low mile 2008 going for these days?
Click to expand...

I’d have to win the lottery.

I’ll post these here too, too lazy to start a new thread.

️
This yellow 2007 Corvette GTP has 4,200 miles on it.
Engine: LS7 505HP
Only 1 owner
No rust
Has no title but has a manufacturers origin (this car would be best for racing)
Spec sheet listed on the last image.

️
This silver 1963 Chevrolet Corvette Grand Sport is similar to the car in the Fast and Furious 5 movie.
(The scene where Vin Diesel and Paul Walker leaped off the back of this vehicle over a canyon and into a river.)
This car has 3,600 miles on it.
Engine: 350/375HP
Only 1 owner
No rust