I know some of you don't go to the "other" forum much anymore, so I thought I would also post this here.

Before I get into the how-to part of this thread, I want to say that my vacuum system worked perfectly; I didn't do this because there was something wrong with it. In 2013, I did the electric headlight conversion, and I was so happy with it that I decided that I also wanted to do an electric wiper door conversion to get rid of the rest of the vacuum system. I also have never been a fan of how the wiper door vacuum actuator looked in the engine compartment.

I have seen a few different ways people have already done this, specifically either using a linear actuator or an electric seat motor, so I bought one of each to decide which I liked best. I started with the linear actuator; I got as far as fabricating a temporary mounting bracket and installing it. After some tests, I decided to pull the plug on the project because there were a few things I just wasn't happy about using it, and I realized some of the same things would also bother me using a power seat motor.

- both the linear actuator and seat motor had operation speeds that were too slow for my liking
- both required wiring that while fairly simple, was still too complicated than I wanted it to be
- if there was an electrical or mechanical failure of any of the parts, both would require some amount of disassembly to manually operate the wiper door, which was something I didn't want to do on the side of the road

And the desired function that was absolutely the most important to me:

- the ability to operate the door manually if there is an electrical or mechanical failure of any or all parts with little or no disassembly required to do so, especially if the failure occurs with the door in the closed position and I need to open it. Some people are more concerned about minimizing the size of whatever operates the door in the engine compartment, but I really wanted simple manual control to be a priority.

I tried to figure out a way to accomplish this manual function with either the actuator or seat motor to no real avail, so it was back to the drawing board.

Then it hit me - why not try to use the same Miata headlight motor that I used on the headlight conversion! These motors can be manually operated by turning the red manual knob, so it was a question of would it actually fit and function the way I wanted. Since I had bought a couple of spares, I got them out and quickly determined that it just might work. I fabricated a prototype mounting bracket, basically guessing how it should be located, and then tweaked it to be where I wanted it. Then I prototyped a linkage, and also tweaked it after some testing to operate exactly as I wanted. It worked! All that was left to do was sort out the electrical control circuit so it would operate exactly as the factory vacuum/electric control circuit. Once I had the electrical figured out, I made my permanent mounting bracket and linkage.

I put it to the test over the entire driving season of 2014, including many washes and getting caught in the rain a few times, and I am happy to report that it works perfectly! It is a fairly inexpensive and uncomplicated conversion.

So here is a list of the parts I used:

It seems that with some of these Probe and Miata electric motors, the motor shares a common ground with the metal housing. They are easy to identify because there is only one wire coming from the motor brushes, and the ground wire in the harness is attached to the housing with a screw; even removing the wire attached to the housing does not isolate the motor from the housing. I don't know exactly what years these common ground motors were used, but if you want to control them with a PWM controller, you will need the type with an isolated ground.

Here is pic of common ground motor on top, and an isolated ground motor on the bottom; you can easily see on the top motor the single blue wire coming from the brushes, as well as the ground wire attached to the housing with a screw: 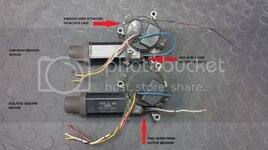 I used this exact PWM controller, I mounted it in a Hammond project enclosure box I already had:

A PWM controller like this one should also work, and it is already mounted in an enclosure:

This is the exact limit switch I used:

Here is a pic of all the electrical devices I used for this conversion: 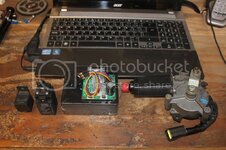 Mods required to the wiper door linkage and firewall:

The rivet that holds the original male rod end on has to be drilled out to remove the male rod end. The 1/4" female rod end is then attached using a 1/4-20 bolt and nut. I used small pieces of brake tubing slipped over the bolt on either side of the rod end to act as spacers to allow the rod end to fully articulate in the side-to-side motion.

The wiper door linkage is attached to the firewall with 3 brackets; the bracket in the middle that also attaches the vacuum actuator needs to have the space between the 2 attachment studs opened up to accommodate the side-to-side motion of the new linkage; the hole in the fiberglass firewall that the linkage passes through also needs to be opened up accordingly.

This is not mine, but in this pic, you can see the original threaded male rod end, as well as the space in the bracket that needs to be opened up: 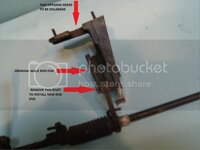 In these pics of my setup, you can see the bigger hole in the fiberglass, as well as the 1/4-20 bolt, nut, female rod end, and the brake tubing spacers on either side of the rod end. In the second pic, if you look at the metal hood latch reinforcing plate that is riveted to the fiberglass, you can see that I trimmed the part that is attached with 1 rivet on the front where the bracket I made for the motor is attached; I did this for more space for the bracket. 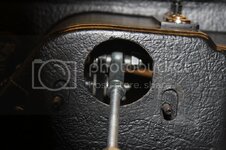 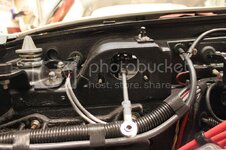 I mounted the wiper arm limit switch in the location that the stock vacuum limit switch was. I made a bracket out of 1/16" aluminum angle. I made all the holes slotted in the piece of angle to allow adjustment of both the angle to the stock mounting point and the limit switch to the angle. The position of the limit switch in relation to the wiper arm takes some trial and error fitting to get right. Any type of limit switch with a suitable type actuating arm and at least one set of normally open contacts should work. I chose the one I used because it was listed as water resistant and seemed to be a suitably small size. It was a tight fit, but it did work. As with most limit switches of this type, you can remove the 4 screws from the top and clock the arm in any one of the 4 possible positions.I had to clock mine 180 degrees from it's as-shipped position. I used a 2-pin weather pack connector mounted on the engine side of the 3 hole rubber grommet that the vacuum hoses to the original vacuum switch passed through to connect/disconnect the new limit switch from the circuit.

Here are a couple of pics of the limit switch installed: 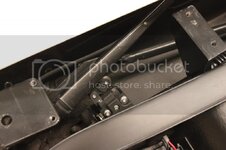 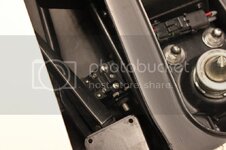 Not much to tell about these 2 items. I mounted them both inside the car behind the passenger side dash, on a bracket mounted to the birdcage. I found the PWM speed controller set at about half way was the speed I liked best.

On the motor arm, I drilled out the original stud, and then plug welded the hole closed. Then I drilled a new hole 1 1/4" from the arm mounting hole; this measurement was based on the fact that I needed 2 1/2" total throw from the arm. To come to this conclusion, I mocked up the linkage rod to the wiper door linkage, and simply measured how much movement was required to open and close the door completely. Every car is different, your results may vary. I used a 1/4-20 bolt and nut to attach the female rod end to the motor arm, and I also used 2 more small pieces of brake tubing above and below the rod end to facilitate up and down motion of the rod end. My linkage is about 5 1/4" between the rod end mounting holes, but again, yours may be different due to differences car to car.

I completely cut off the outer mounting leg on the motor, and I cut the other 2 remaining mounting legs shorter. The mounting leg at the back which is against the firewall comes close to the factory box for the fan and heater core, so it needed to be shorter, so I just cut the other leg to match.

The motor bracket is made of 1/8" aluminum plate that I put a 90 degree bend into. The final mounting position was determined by educated guess and trial and error. The size and shape of the hole in the bracket that the linkage rod passes through was also determined by trail and error. I used a piece of 1/16" rubber that I cut to fit between the bracket and firewall to act as a gasket.

I used a 4-pin weather pack connector on the motor to connect/disconnect it from the circuit.

These pics show most of what I just described: 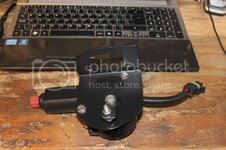 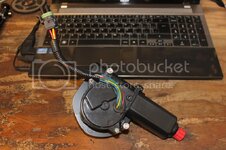 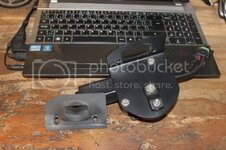 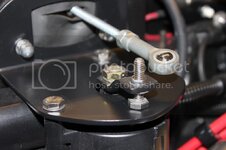 The red arrow in this next pic shows the location on the firewall that I drilled a hole and installed a grommet to pass the electric motor and limit switch wiring into the car: 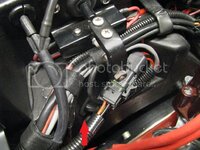 Here is my high-tech, 1080p, 3D electrical schematic! It is very simple. If you notice, I did not feel the need to complicate the circuit with an override switch for the wiper door motor; all you need to do is use the stock factory wiper motor override switch to open and close the door without the wipers operating. You can attach the relay coil wires to the original solenoid connector without cutting it using male 1/4" spade terminals and simply push them into the original connector. Using the original factory wiper switch energizes the solenoid wiring which in turn operates the relay though the relay coil. The system works exactly as the factory system did. Simple! 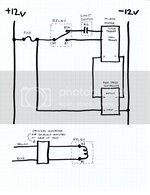 Here is a pic showing the finshed conversion parts in relation to the old stock parts: 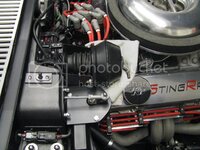 Here are some general pics of the conversion: 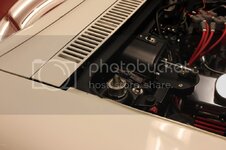 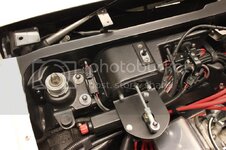 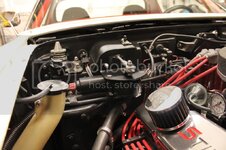 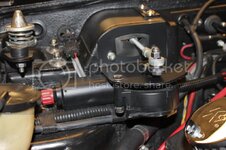 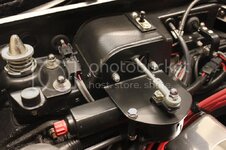 Here is a video of the limit switch and the motor operating:

I haven't decided yet if I will fabricate something to cover the linkage on the motor; everyone I have asked about it so far has said not to cover it up!

All of this could be removed and returned back to vacuum, and the mods to the firewall and linkage would be hidden. None of the stock wiring has to be cut to install it either.

WOW! You have set the bar for a DIY posting of a How-To.

I may need to review/adapt if I need to "throttle" my Cowl Induction.

Thanks for the compliments! :beer:
You must log in or register to reply here.

G
I’ve got the Blue’s