I swapped a 2K4 GTO LS1 w/ T56 into an 82 C3. The install went pretty smooth, the only hickups were that for the GTO accy drive and low mount alt you need to notch the drivers side motor mount or you have to remove the alu support bracket on the back of the alt. I purposely left that in place so the alt doesn't flex and results in belt issues.

The exhaust are some reworked chinese stainless 4th gen F body headers, collectors opened up to 3"-> 2.75" via a little narrower merge style.

The GTO T56 needs a new shifter, the rear offset unit can not be used. Also, the shift cup on the shifter rod is wrong, it has an offset to the rear. You need an F body shift cup. The other issue is the GTO throwout bearing, it uses a hard line with a small funky quick disconnect. Easiest is wapping for a normal throwout and a remote bleeder kit.

For the fans, I wired it all up for 2 fans but am only using 1. This triggers a check engine light, you have to either gronud or complete the switching side of the circuit by inserting a relay.

I'm setting it up for an LS7 cartridge MAF in a 4" tube so the maf tables will need some tweaking.

Pics of the install:

Fabricating air intake, a brake cooling type hose will supply cold air to the filter when all is done. 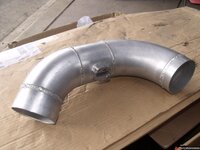 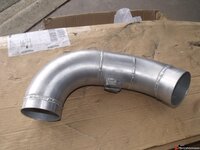 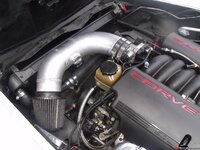 Stands out like a sore thumb so I coated it with some nice texture finish stuff, looks a bit like the oem plastics now 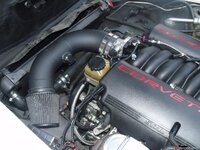 NOTE!! the water pump is drilled for a stock water temp sender, I figured this was a convenient location for it. Also, the rad hose has a small fabricated conenction [piece with a T-ed off fitting in it, I used it to hook up the steam line from the engine. Do not block off the steam line on these. This engine is set up with a remote oil filter mount that I also modified to hold the oil pressure and temp senders. 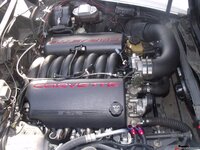 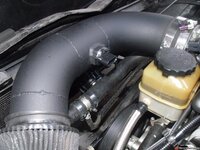 cags removed, reverse lockout blocked off, I removed the plug later and hooked up the lockout. It's too easy to catch R when going to 5 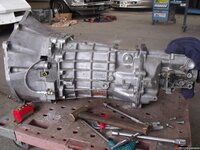 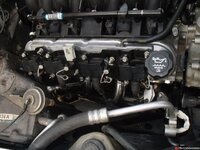 I added heat sleeves to the spark plug wires, also heat shielding around cables and heater hoses. EGR stuff is all blocked off

The hot water valve was removed, I installed a 4 port one from the GTO the engine came out off. It constantly bypasses the water in the system instead of blocking the route. I mounted it low on the frame, under the heater box. 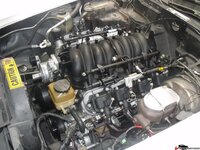 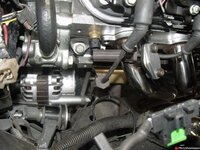 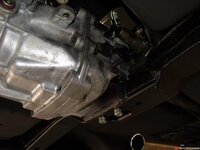 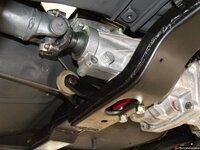 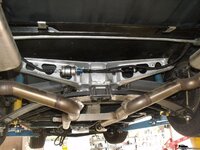 the outside port is the feed, the center the return, contrary of many pics on the internet. This is WRONG! 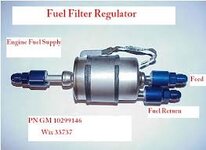 It runs also.... throttle response will be better when I have the MAF tables set up for the 100mm tube & cartridge maf combo.


Pics of exhaust, also visible the 4 port GTO heater valve and some other stuff 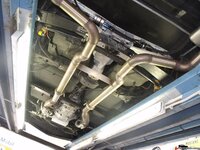 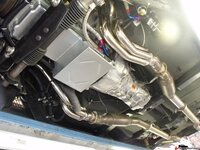 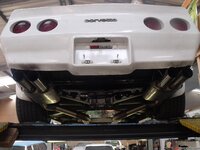 I assume the reservoir on top of the engine for power steering. Is that from the GTO?

Does the fuel pump have a fixed max pressure or is it voltage controlled like a LS1?

the fuel pump is not even an ls1 pump, it's a in tank areomotive stealth pump, the pressure regulator is in the filter canister thing. It's set to 65lbs from the factory. The pump simply sees 12V via relay, ECU controlled. No PW control on it at all. I have played with some PW controlled systems to regulate pressure, one was on a PowerJection system...it was teh suck!! Never worked OK for me, redid the whole system for a manual set adjustable FPR w/ return. Ome thing i never liked on PW controlled pumps is you loose the check valve so it bleeds off pressure immediately and if you don't start teh car after the relay primes the pump for a couple of secs you get a rising pressure during cranking, it extends cranking time.

What brand and model of headers? Any fit challenges?

TT,what R&P setup did you use for the steering? Nice clean work as you always display.:beer:

So what would you recommend?

Sent from my GT-I9000 using Tapatalk
You must log in or register to reply here.