Making Your Own Harness

Enough things are different about my car that I would like to make my own engine/ignition harness. The catch is the connector to the main fuse block. Anyone know if you can buy that connector shell?

Not sure about that but Painless has a ton of options for their product. It would be worth calling them. 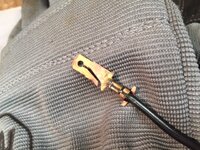 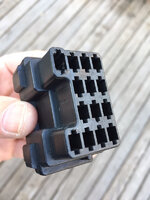 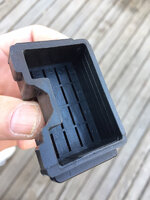 The lighting harness is basically done, I'm glad I did it this way. All the wires have been replaced and in some cases eliminated or their function is changed. I wish I would have done this with the ignition harness. I probably cut out about half the wires. 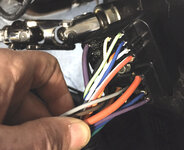 For the past couple of weeks I have been struggling with the wiper motor. A little background, I am using a long hood so I don't need any of the wiper door switching. The wiring is for a 69.

The complication is understanding the switch logic/vacuum switching interface to a later motor (which is very simple). A further complication is the wiper switch. What an incredible pile of junk. I bought a new one that was DOA, I didn't know it, and spent a week trying to get it to work. There are some switch tests at Willcox that allowed me to determine it didn't work. So, a new switch. Long story short, I finally got it working. This switch looks like and works like some thing from a 50's Japanese toy. Has positions off-low-high and push for wiper pump. It is almost impossible to get in the middle/low position. 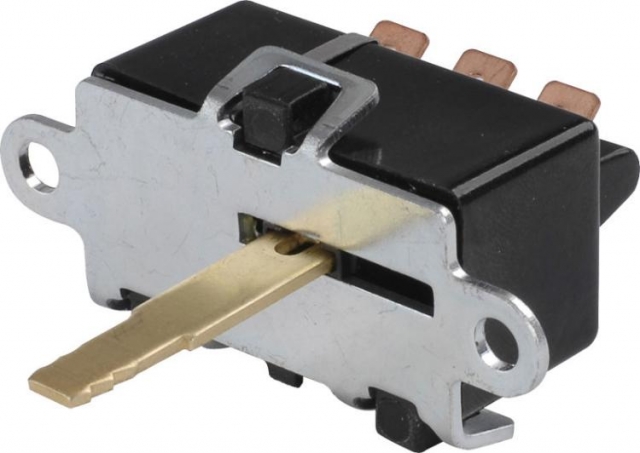 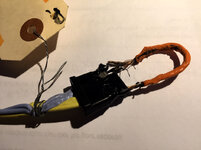 Thinking about losing the washer pump and using a DPDT switch. Can't really imagine being caught in the rain!
Last edited: Feb 18, 2020

So I eliminated all the wiper door switching, overrides and relay. The stock switch will go in the trash (where it belongs). I am going to replace/rewire to use 2 modern rocker switches. First switch will give me a single speed and add another momentary switch so that I can get the wipers to operate a couple of swipes, then park (sort of a manual/intermittent wiper). Also eliminating the washer function. I don't see myself getting caught in a monsoon so this should work fine.

Please share your diagram for the simplified switch setup, sounds cool! Im all about electrically simplifying things, but I still plan on keeping the "wiper door open" switch... bad things happen if the door isnt open all the way and the wipers are anywhere but in the park position. Ask me how I know :suspicious:

Will you run the motor in high speed only?

I am going to make a hybrid 1968 BB/1973 long hood. So, things are a little easier, no wiper door. But I admit I struggled with understanding what I needed to do to get the 69 wiring harness to just operate the motor! I put this schematic together from a 69 schematic and a 74 schematic. Tried it and it resulted in the ultimate electrical fail (melted wires). In my defense, I was working with a defective switch and didn't know it. 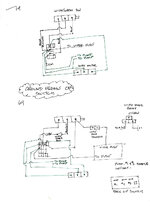 So, my second run at this involved completely re-thinking what I really wanted the wipers to do. The 69 wiper has a pump to squirt wiper fluid when yo push the switch button in. I don't see myself driving through a mud bog in this car so, I don't need that. I also don't see myself driving in a monsoon so I can do without the high speed wipers. I would like to push a button and have the wipers swipe the window once or twice. I think that's useful. Lastly, I wanted to replace that awful switch!

So, the next step was to "hotwire" the wiper motor and see if I could make it do what I want. It took five minutes:twitch: This is after spending a couple of weeks screwing around with this.

It's so simple you don't need a schematic. There is a three wire connector that goes to the wiper motor. The middle one is the switched power. The bottom is grounded. To turn the motor on to low speed the top wire is grounded. To park the motor and tun it off, you switch off the ground (to the top terminal).

I think the wiper door electrical/vacuum interface to these cars is really over complicated. I had the same issue with the headlight door and motors on mine. I had two choices. Turn the motors and headlights on at the same time or open the doors and have a switch on the doors that turn the lights on when fully open. I think you could do something like that with the wiper door. So the open door would actually trigger the wipers.

BBShark said:
Enough things are different about my car that I would like to make my own engine/ignition harness. The catch is the connector to the main fuse block. Anyone know if you can buy that connector shell?
Click to expand...

I'm in the process of doing the same thing. I went with a Delphi Packard Bulkhead connector (cheap on Amazon). I'm going to make a blockoff plate for the area where the original fuse block/bulkhead connector used to be and make a hole in that to accept the Delphi Bulkhead.

I though of reusing the original one and depinning but my connector looks like its seen better days.

I made more work for myself doing it the way I did. If I had to do it over I would have done what you are doing or a Painless rewire. For a car that has EFI, radiator fans, electric headlight doors, etc. you need to figure out what wire does what on the original car and then figure what you can use and what you need to add. Starting with a clean slate is better because you just need to figure out how to make it work.

Painless is the way to go. I have the rear tailight section almost done too. All I have to do is tighten up the look and get back to the dash. I started up the engine and so far so good. I still need to test the charging system to make sure it's all working right. Pretty painless to do.

Hey Steve, sounds like you are close. I'm about 80% done at this point. The weather is getting close around here that I can open the garage to get it tuned. Still need a clutch and brakes to make it drivable.

BBShark said:
I made more work for myself doing it the way I did. If I had to do it over I would have done what you are doing or a Painless rewire. For a car that has EFI, radiator fans, electric headlight doors, etc. you need to figure out what wire does what on the original car and then figure what you can use and what you need to add. Starting with a clean slate is better because you just need to figure out how to make it work.
Click to expand...

Then I contacted Vette427sbc on another platform after seeing some of his clean wiring work. After about a week I decided to take his advise and order a generic "HotRod" harness. Best idea ever. Everything is labeled and very minor modifications to the harness were needed so far. This will lay the ground work and I can modify from there.
You must log in or register to reply here.
Share:
Facebook Twitter Reddit Pinterest Tumblr WhatsApp Email Share Link
Top