I am using 2 electric radiator fans from a 90's Camaro (and just about any other 90's GM car). Working on the wiring now and having a hard time finding information about ratings for relays, fuses, breakers etc. Most of the time, when you look for information on the internet, you will find so much information you can't really decipher accurate info. This is one of those cases. I have seen people post running current (per fan) of 5 to 50 amps. The 90's Camaro had a 25 amp fuse. I think both fans come on at the same time.

So, my thinking is that the current spike would last less than 100ms and say that current is 50 amps. Would a transient current spike overload a relay, fuse or breaker? 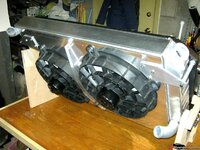 If the stock camaro fan was fused at 25A (each?) Then they must have survived whatever spike the fan creates at startup... I cant imagine they were soft start/PWM in the 90's

Took a closer look at the Camaro w/heavy duty cooling schematic and the radiator fan(s) has a 20A fuse. But my schematic only shows a single fan and the wire (from the fuse) to the relay is triggered by a coolant temp switch. This appears to be the relay listed (35A rating).

The main power to the fan through the relay is a hot wire with a 20ga fuseable link. Not finding much info on the rating for a 20ga fusable link. Most of the info on the internet is car stereo stuff and it all over the place.

Steve, is each fan on a 30A fuse or circuit breaker?

Each fan came with a separate wire relay and a 30 amp fuse.
You must log in or register to reply here.

Radiator Fan Control, Off When not Running

Speed 33 Cabrio Into A Hardtop Coupe