My starter was warning me by missing the turns. Looking more into it, my teeth are breaking.

I need to get a new flywheel and I am not sure what to buy. What will be the best - strongest for a 383 stroker, manual transmission? Is there a way to find out what size I need without pulling it completely out? I wanted to order the new one and swap it out at the same time.

Breaking teeth on the flywheel or the starter?

BBShark said:
Breaking teeth on the flywheel or the starter?
Click to expand...

Flywheel, it's the original Flywheel.

So far, the billet flywheel is a lot stronger than cast iron, and the aluminum has steel teeth. (Billet).

The aluminum will rev quicker and is lighter but does not hold the energy. Could be a rough feel for street driving.

A billet steel is heavier and it holds the energy for a smoother feel for the street.

I drove a C5 with a lightweight flywheel. It was really a pain to drive on the street.

If you are breaking teeth on the stock flywheel, it's probably the starter engagement. Maybe not shimmed right.

Yes I agree, when I installed it, seem smooth but after a few starts, trouble started. I was told the bolts can affect the alignment and that's probably the issue. I will tear it down tonight and see.

I have to have it done for Monday because I have an appointment with the dyno guys.

NEED HELP PLEASE.
I installed the new flywheel and tried to make sure the starter was clearing but I think it's wrong. I turned it over and I believe I heard it chip a tooth out of my new billet flywheel... not to happy at this point. From what I read, the gear pinion should be .030 and mine is way bigger and there is no way to get it closer. AND, my old starter has 9 teeth and they seem to be thinner than the high torque starter with 11 teeth.
What am I doing wrong and how can I fix it?
Thanks in advance!

The two close ups of the pinion gear is my original 9 tooth and one of the newer ones with 11 teeth.

The one installed is also 11 teeth. 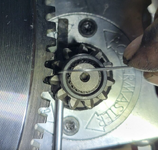 What is the tooth count for your new flywheel?

168 tooth on the old and new flywheel. The starter is also a stagger bolt pattern.

Researching a bit, if I use a 1/8" drill bit to separate the starter bindex shaft to the outside of the flywheel, I need to add 1 shim. BUT looking at it, it seems to move the starter gear farther away from the flywheel. Is there a preferred distance for the gears to engage?

This is what I am looking at for the proper 1/8 shim. My question, is it too far away? Is the starter gear going to engage the flywheel enough and not damage it?

Hard to see because of the lead-ins on the pinion gear but it looks like it's engaged 100%. Not sure but I think it's supposed to be 60-70%? Also found this

I had a similar problem on my Renault-powered Sports Racer. I did everything as you have including an endoscope view of the entire flywheel. But then found out that there was supposed to be a "pin" to help ensure the starter was properly aligned. I had the pin in the wrong mounting hole. {Surprising the stuff you can find in the manual!]

When I moved to the correct one - got perfect alignment - and now starting just fine. [But have been "prohibited from racing it - she says I need to get on the 'Vette!]

I don't know if there is/is not such a pin on this starter mount - but if so, it could be worth a check! Best of luck.

I don't think this was the correct starter. There is no pin or an adjustments to move it closer. I bought a cheaper mini starter and the line up looks great. I am hoping it will last. $67 on Amazon.

I appreciate the help guys. I've learned a lot from this ordeal. The paper clip fit perfect and it sounds like it should.

It took me all day to get it back together but that included rebuilding the hydraulic clutch bearing and installing an adjustable dual flow PCV valve. It really helped my idle and smooth out the motor.

The dual flow PCV valve is interesting. My guess is it smooths out the idle in lower vacuum engines?

before you drive yourself nuts. how's the block? twice, I've had issues with starter engagement, the first was a 400 block that cracked, got rewelded but over time swelled and caused the starter issue. The second, I never did figure it out (actually it was the first time). It was a 350 stone stock but no matter the alignment - it still ground.

And with that said, do you have a starter support on the opposite end as the teeth? it can do 2 things, one, if it's wrong, hold the starter away from where it needs to be and if missing, the starter moves.

as far as alignment, the drill goes between the tooth and the gear.... and it really is 1/8" too much and the starter will hang up - and, in worst case scenario, break the outer-most bolt hole in the block (don't ask me why I know this.... it's not a good story)
A